He has worked on many issues in the area including helping to secure the reinstatement of a regular bus service on the car estate, tackling unauthorised traveller encampments on Hanwell Fields, securing road resurfacing on residential roads, and supporting the renovation of the bungalows on Banesberie Close. He has also been an ever-present campaigner supporting local efforts to protect services at the Horton Hospital. As a District Councillor, he led Castle Quay Waterfront - the Council's multi-million-pound regeneration of Banbury canalside.

Tony’s connection to Banbury started two decades ago when he moved to the area to open a business in the town centre. 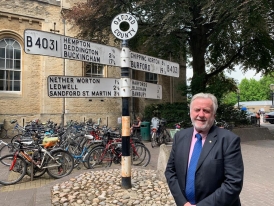