Kieron’s knowledge of, and record of service in, Banbury is second to none. He was first elected to Local Government in the town in 1997 and currently represents the residents of Easington on all three local councils - Banbury Town Council, Cherwell District Council, and Oxfordshire County Council. His continuing motivation for public service comes from a resolute commitment to Banbury and improving opportunities for the next generation.

In his 20 years+ of being a Councillor, he has been a vocal campaigner for residents and helped to shape several local initiatives. His no-nonsense approach means he gets things done locally. In recent years, he has secured the reinstatement of B1 Easington and B7 Poets Corner buses, had two 7.5-tonne weight limits implemented in Easington, and pressed for the safety record of the A361 to be recognised resulting in £4 million worth of improvements.

Like most people locally, the Horton General Hospital is a cause that Kieron feels very passionately about. He was a founding member of the Keep the Horton campaign and has been fighting for Horton services for the past 25 years. As an ex-serviceman and member of Bloxham Royal British Legion, he is also a strong advocate for our armed forces. He is currently the Leader of the Council. 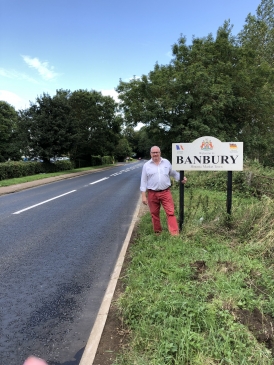