Ian was elected County Councillor for the Ploughley Division in May 2017. He is passionate about the needs of the rural community from protecting each village's unique heritage to the farming economy, broadband, tackling rural isolation and improving local roads. Ian has lived in the heart of the area in Ardley with Fewcott for 24 years and has been involved in several local campaigns including opposition to the Ardley wind turbines and defending the area against excessive local development both industrial and residential. He is anti-HS2 and has been involved in efforts to retain vital acute services at the Horton General Hospital in Banbury.

Since becoming your County Councillor, Ian has focused on local community interests from campaigning to secure funding for safety improvements to the Wendlebury bus stop to restoring community bus routes, pushing the case for the installation of a pedestrian crossing at Heyford Park School and campaigning for funding for communities that will be impacted by HS2, East-West Rail and the Oxford to Cambridge Expressway, as well as, of course, tackling potholes and defects on local roads.

Ian currently serves as a Cabinet Member on Oxfordshire County Council and an Executive Member of Cherwell District Council, where amongst other things, he is responsible for delivering partnership working between the two authorities. He is also a non-executive director of Graven Hill in Bicester, which will be, when complete, the largest self-build site in the country.

Residents in Stoke Lyne can now upgrade to superfast broadband thanks to an extended rollout of the Better Broadband for Oxfordshire programme. 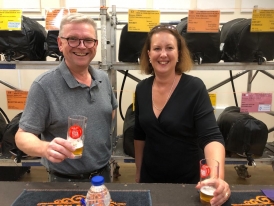