Already a Bicester Town and Cherwell District Councillor for South Bicester, Dan was elected to represent the Otmoor Division on Oxfordshire County Council in May 2017. Living on Langford and travelling across the Otmoor Division for his daily commute, Dan is well placed to tackle issues in Bicester, and the villages within the Division, alike. Dan has a strong track record in standing up for residents' interests on the issues that matter from fighting to protect local green spaces like Gavray Meadow, Otmoor Nature Reserve and Oxford Road Sports Ground, campaigning for a solution to the London Road crossing and championing Graven Hill, which will be, when completed, the largest self-build site in the Country. 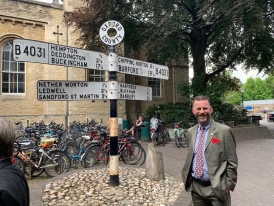