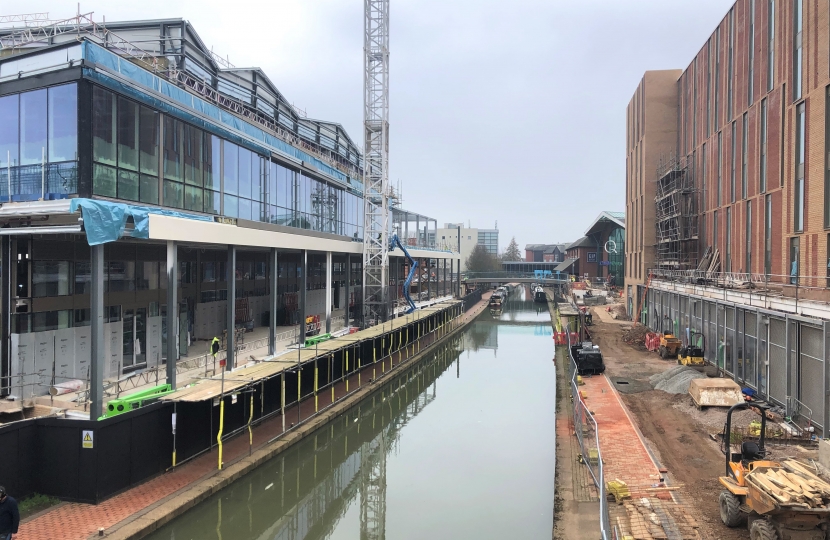 The leisure extension to Castle Quay shopping centre has started to come to fruition with the opening of the Lidl supermarket and the Premier Inn (later in the month). Located on both sides of Banbury’s historic canal, the waterside development has been financed by Cherwell District Council who stepped in to deliver the project in December 2017 after the proposed developer withdrew.

Groundworks began on the site in February 2019 with construction starting a few months later.

The first phase of the £60 million development is now complete and open to the public.

Work on the second phase which will include an eight-screen movie theatre and restaurants continues. Under the original plans, six restaurants were set to fill the units underneath the cinema but Cherwell District Council last night approved a change of use for three of the units which will now be converted into bowling and mini-golf, both of which will be run by the cinema operator. The other three units will remain eateries.

Banbury Conservatives said: “We are thrilled to see “Castle Quay II” start to open. It was a bold move by Cherwell District Council to take on the build but their investment will be transformative for Banbury. The town already has a strong retail offer but this development will make Banbury a destination for residents and visitors alike.

It is so important that Banbury puts its best foot forward post-Covid so our great town can thrive once more. We are already bouncing back well with footfall in the town continuing to increase. Last week footfall rose 2% compared to a national average of 0.2% putting Banbury in the top 7% of UK centres when ranked on Comparison Goods spend, according to CACI 2021.

The canal-side development will provide yet another reason for locals and visitors to come into Banbury and enjoy all that the town has to offer."