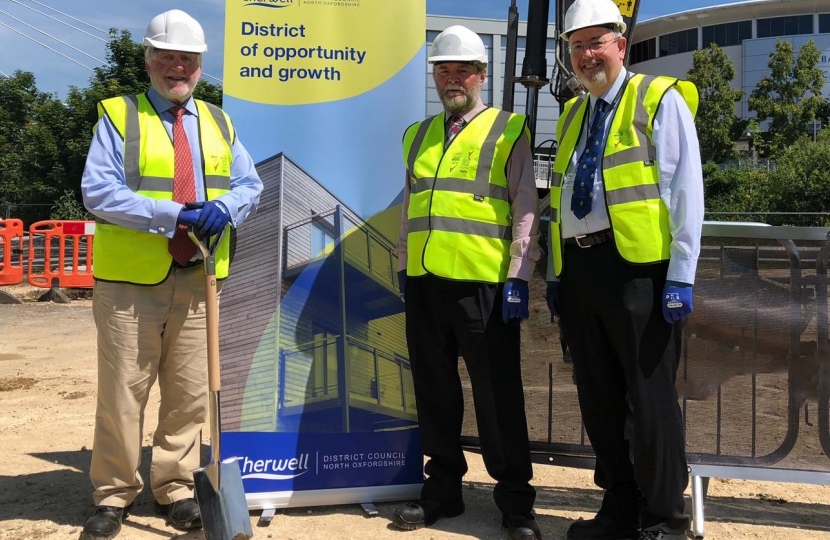 The leisure extension to Banbury’s Castle Quay shopping centre entered a new phase today as a groundbreaking ceremony marked the start of construction works at the canal-side site.

With the first bit of soil now dug up, building work on the much-anticipated project can begin. Representatives from contractors McLaren and Conservative-controlled Cherwell District Council, whose £60 million investment will bring forth the development, reiterated the transformative potential of Castle Quay II for Banbury and the town centre. Banbury Conservative District Councillors Tony Ilott (Hardwick) and Colin Clarke (Calthorpe and Easington) joined District Council Leader Councillor Barry Wood at the event.

Speaking with BBC Oxford afterwards Councillor Ilott said: “This expansion will transform the middle of Banbury and make our historic canal the focal point. Residents have been waiting patiently for this development to begin so the excitement is building. It is fantastic that a supermarket is coming back into the centre of town, that a high-tech cinema is coming here and super-duper restaurants where people can sit by the waterside. This is going to be a destination point in this area.”

Several big names remain committed to Castle Quay II. Lidl will occupy the supermarket space, Premier Inn is opening a 117-bedroom hotel, the 1300-seat multiplex cinema will be run by The Light Cinema and six canal-side restaurants will be filled by Zizzi, Nando’s, Handmade Burger Company and Chiquito’s, with two more still to be named.

Our plan for jobs is about supporting people to find the jobs that are out there, creating new jobs through investing in our infrastructure and housing, and finally protecting jobs by revitalising the hard-hit sectors upon which many jobs depend.