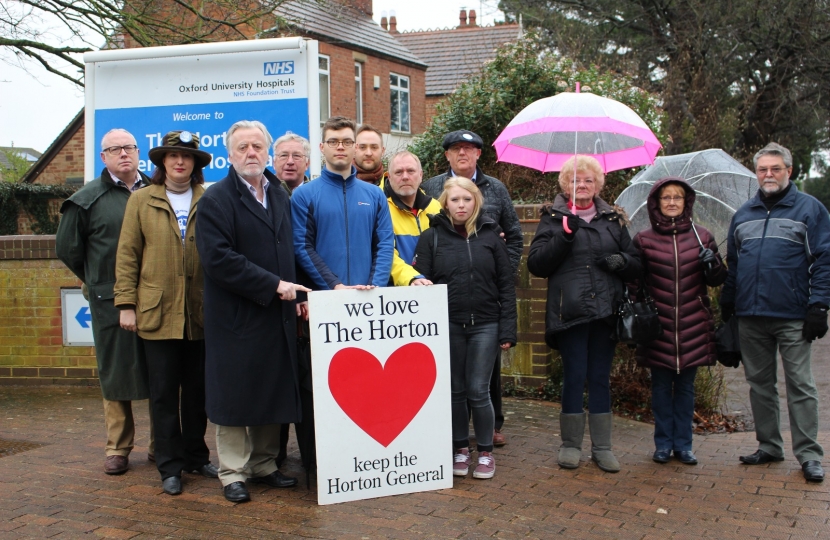 It has been confirmed that the decision by the Oxfordshire Clinical Commissioning Group (CCG) to permanently downgrade maternity provision at the Horton General Hospital will not be referred to the Independent Reconfiguration Panel (IRP).

In September 2019, the Horton Joint Health Overview and Scrutiny Committee (Horton HOSC) unanimously agreed that should the CCG proceed with a recommendation to permanently downgrade obstetric-led maternity services at the Horton, that this decision should be referred to the Secretary of State for Health. The CCG voted to accept the recommendation so accordingly Horton HOSC referred the matter with a thorough and detailed submission sent in early December 2019.

But papers published online in advance of the next Horton HOSC meeting this Friday, 27 November, have revealed that the Department for Health (DOH) concluded that the referral was not valid and therefore it would not be sent on to the IRP.

Horton HOSC Chairman Councillor Arash Fatemian, who is also the County Councillor for the Deddington Division, said: “I am afraid it appears that we have come to the end of the road regarding our efforts to return obstetric-led maternity services to the Horton, at least, in the near future.

I am bitterly disappointed at this outcome and I am aggrieved to have received such an insufficient response to the full and reasonable arguments we presented.

Upon receipt of the decision from the Department of Health, I instantly felt this conclusion was a gross misunderstanding of our position and immediately requested an urgent review of the decision. I made a robust case for the intervention of the IRP outlining in the strongest possible terms how the decision to permanently downgrade maternity services at the Horton was not in the best interests of local mothers and babies and that the substance of this second referral differed from the referral of 2017/18.

In lieu of an unlikely change of heart from DOH, our options moving forward are limited. It could be that Committee members opt to pursue legal action. I would not wish to predetermine the outcome of those discussions but having sought legal opinion from the County Council’s Head of Legal it has been advised that our chances of success are, at best, 30% so I do not think that makes this a viable option.

I am recommending this course of action with the heaviest of hearts. I will never forget the testimony of the brave mothers who came forward to share their experiences with us, nor the efforts that members of the Horton HOSC committee and partners like KTHG have put into this campaign.

But however hard it is to accept; I do think we should be realistic and that the Committee should take heed of the counsel it has been given.

The fight will not end. The CCG has pledged to regularly review maternity provision at the Horton and Horton HOSC has an important role to play in holding them to account on this promise. We will also work positively with the Trust to realise and implement a vision for the future of our beloved hospital.”

Banbury Conservatives said: “Over the past four years, our community; its residents, politicians and Councils have come together and demonstrated, in spades, their commitment to the Horton. This is a difficult day and one that does not reflect the tireless local campaign we have worked on together. We recognise the position of Horton HOSC and will support their next steps. We thank them for their important work to date and urge them to do all they can to hold the CCG to account on their promise to regularly review maternity provision at the Horton.

We also hope that they will help to advance Oxford University Hospitals NHS Foundation Trust’s (OUHFT) vision for the future of our hospital. We have been encouraged that OUHFT has been increasingly vocal about its future ambitions for the Horton in recent months and whilst there is still considerable work to be done and a long road ahead to bring a vision to bear, we stand ready to support these efforts however we can.”

Victoria Prentis MP added: “It is disappointing news that the decision to remove consultant-led maternity services at the Horton General Hospital will not be referred to the Independent Reconfiguration Panel. Over the past few years, the campaign to keep a fully-functioning maternity unit has been hard-fought by the whole community. Now is not the time to give up.

Over the past few months, the Oxford University Hospitals NHS Foundation Trust has been working on its masterplan for the Horton. The “Fit for the Future” vision builds on positive changes made during the pandemic response. It is a realistic and deliverable project that demonstrates a genuine commitment to the future of our local and much-loved General Hospital.

We know that the Department for Health and Social Care is looking to allocate funding to the final “new” hospitals as part of its Health Infrastructure Plan. My hope is that we can continue to work together as a community, alongside our local health authorities, to unite behind our vision and demonstrate that we genuinely deserve this funding.

The Horton has been serving people in our area for almost 150 years. The past fifteen years have not been easy for the hospital as its services have faced possible downgrade and closure. We now have the opportunity to start a new, more positive chapter. I hope the people of Banbury will join me in supporting our vision to realise the potential of the Horton General Hospital so that it can become truly ‘fit for the future’ in the decades to come.”

For our Campaign Spotlight on the Hartlepool By-Election, meet Jill Mortimer, the Conservative candidate for Member of Parliament in Hartlepool.